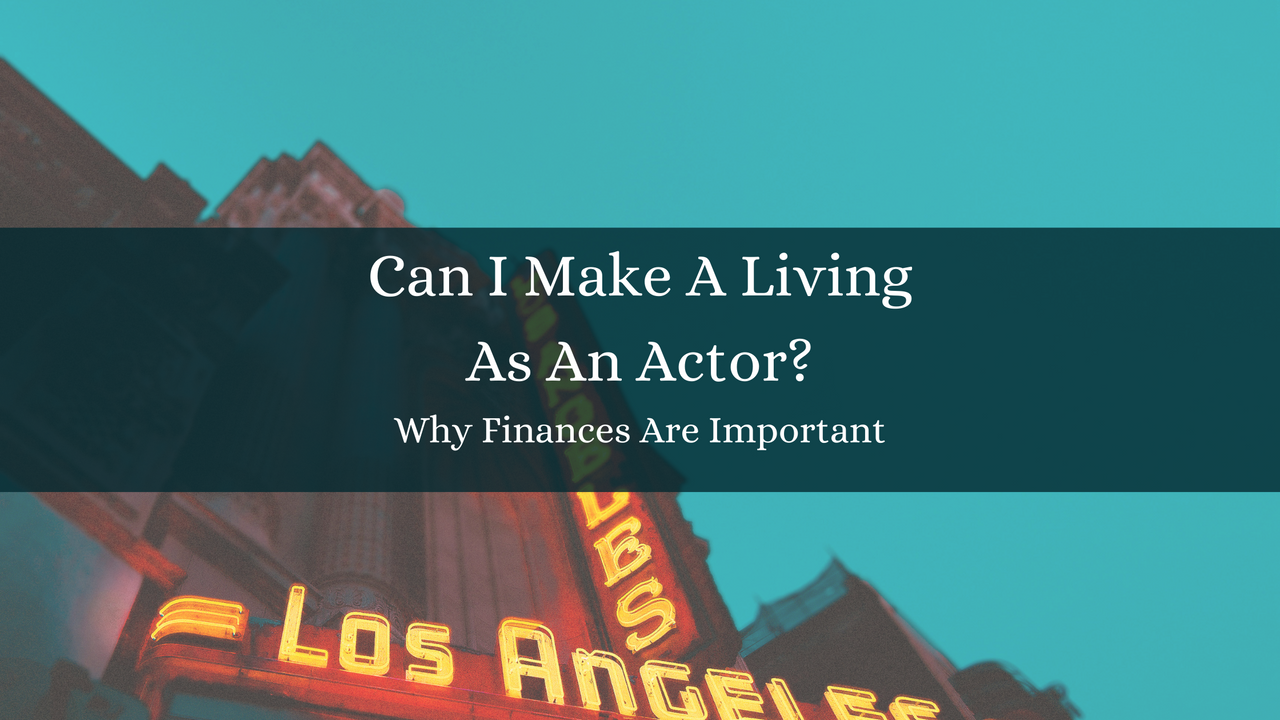 Mastering the Business of Acting
Can I Make A Living As An Actor? Why Finances Are Important
6:06

Can I Make A Living As An Actor? Why Finances Are Important

Can I Make A Living As An Actor?

As with so many other questions I get about an acting career, my answer comes in two parts: Yes & No

We define a working actor as someone who books a minimum of 4 acting jobs per year. Between those gigs and residuals and a non-lavish lifestyle, you could definitely make a living as a working actor.

This blog post is all about the financial realities of the working actor. Discipline and planning are key—make no mistake, the state of your finances will make or break your career.

Financial Planning Is Vital For Actors

Let’s start with my first answer. Yes, you can make a living as an actor.

Acting is a feast or famine business. You have to be smart enough to save intelligently during feast times and not go crazy with your spending to not starve to death during famine times.

Personal finances are of utmost importance because they can make or break your career. Why? Because anything can happen. You may have thought you got a big break with a role only to have the project get canceled or delayed. Life also happens. Accidents, DUIs, loss of side income for any reason.

I always recommend that working actors have 7 to 10 thousand in savings. If you are single and don’t have this money tucked away, you won’t be protected when shit hits the fan.

Making a Living When Supporting Others

Keep in mind that it’s tougher to survive on an acting income if you have any major life expenses like a family and a mortgage.

The times when things you never thought could happen, happen. People with children or partners have even more factors to take into consideration. You are no longer worried about just yourself but their welfare and quality of life, your partner’s and children's needs, their education, etc. Should problems arise, using your savings to solve them could become inevitable.

If this sounds like you, I’d recommend finding ways to generate side income, such as investing, to alleviate the stress on your wallet (please note that I understand this is only available for people with spare income). While financial planning is important for anyone, it's doubly so for those supporting others.

"Acting is a feast or famine business. You have to be smart enough to save intelligently during feast times and not go crazy with your spending to not starve to death during famine times"

No Financial Planning Can End Your Career

Now’s the time to give my second answer: no.

Without a base of around 7 to 10 thousand in savings and a constant focus on your finances at all times, your acting career can end within a year. In fact, eighty percent of people who quit acting within their first year blame financial issues.

Think about it this way: how would you compete with actors who can spend multiple days preparing for their gigs in their free time while you’re driving for Lyft or waiting tables etc.? Having savings could give you the flexibility to take a day or two off to prepare as well.

In the (not so) older days, meaning the 1990s-2000s, you could land a 22-episode deal on network TV and that job would take 8 months out of the year. These were also likely multi-year contracts, meaning you’d probably never have to worry about money ever again.

But the world has changed and the industry with it. Only a few big names make their money in film now and a larger pool of actors do it with TV. Studios now produce fewer episodes each season and, even if you have a multi-year contract, you don't have the same freedom to do what you want after each season wraps up.

Nine times out of ten, it's impossible to find another job that will take care of your needs and accommodate your schedule for the rest of your year. Most actors end up doing films, which don’t pay well, or recurring guest star roles, which are limited. To make matters worse, most producers don't care to cast you for recurring roles if you have schedule conflicts with other projects.

"But the world has changed and the industry with it. Studios now produce fewer episodes each season. Most actors end up doing films, which don’t pay well, or recurring guest star roles, which are limited."

Acting Is A Marathon

Most young actors make the same mistakes as people in any other lucrative industry who suddenly make a ton of money and spend it all right away because they are not educated enough on finances. Actors who are lucky enough to get a second chance know not to do that again. They’ll also be in a better place to succeed because they know how to make their money work across a year or longer.

Acting is a marathon, not a sprint. Because of this, having savings will keep the marathon going.

As you can gather, the answer to this overarching question is extremely relative. A single person may have to spend a minimum of 30-40 thousand a year to survive in Los Angeles as an actor.

And guess what? It doesn't matter if you're just starting out or a huge star. Finances can ruin you regardless of your status in the industry if you're not careful. Star careers take tumbles all the time, resulting in them suddenly having to accept undesirable gigs just to survive.

The saying goes, “You're only as good as your last gig.”

Unless you’re one of the biggest stars in the world, the chances of being financially secure at all times of the year for the rest of your career are very, very slim.

That’s why taking care of your finances even before you begin your acting journey is so important. Do not ever take this aspect of your life lightly. Always have backup plans and processes put in place for the tough times because you will, without a doubt, have to face them.