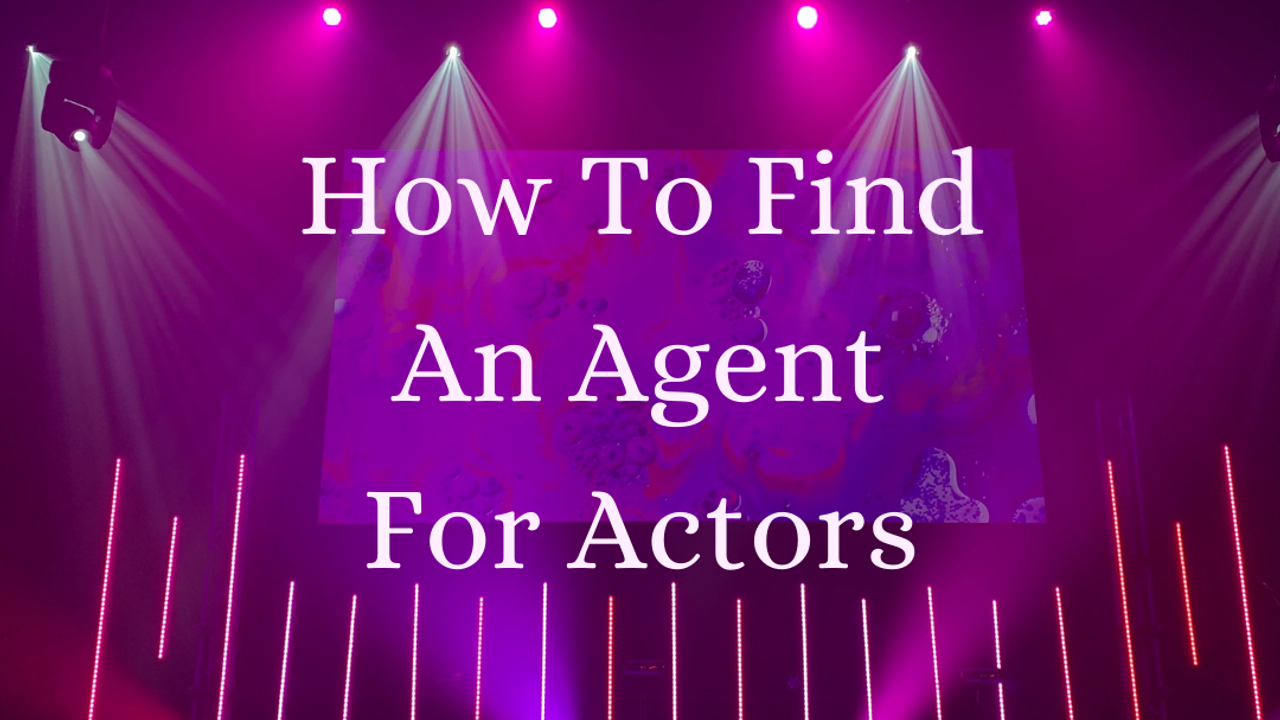 Mastering the Business of Acting
How To Find An Agent For Actors
11:56

How To Find An Agent For Actors

Few things are as necessary to an actor’s career as finding an agent. Agents will submit you for roles and negotiate your contracts. Early in your acting career, they are invaluable in helping secure early roles, build your resume, and gain valuable experience in your craft.

Yet not all agents for actors are created equal. Some may promise you more attention than they’re willing, or able, to give you. Others may flower you with compliments and talk of your potential without putting in the work to get you roles.

In short, you need to find the right agent for you.

In this post, you’ll learn the basics of how to find an acting agent. I’ll cover resources and the best ways to reach out to them. Agent searching also comes with many pitfalls, so I’ll also note warning signs of agencies to look out for. But before diving into these resources, let’s start with you. Agents and agencies will need to understand what makes you stand out from the thousands of other actors around. This is how they’ll decide which roles to put you up for and help build your career.

In other words, how do you best present yourself? The answer is through your niche.

Your niche is the one quality that serves as your selling point in the industry. If you're incredibly attractive, that's your niche. The same goes for having an unconventional look; short, tall, the list goes on. Keep in mind, however, niches aren’t exclusive to appearance. Special skills like knowing multiple languages or martial arts are niches.

Everyone is marketable, yourself included, as long as you figure out your niche. And whatever your niche may be, don’t hide it. Celebrate it! Market it!

With this in mind, it’s time to start the search for your new acting agent.

The best way to know if an agency is worth your time is by looking through their client lists. Take note if their lists have a lot of people that you would consider a part of your niche. If so, you’ll want to look elsewhere in order to not get lost within the pack. Use this as a process of elimination when choosing which agencies you want to reach out to.

Even if you do see a potential opportunity with the large agency, keep in mind the potential downsides. Unless the agent who signed you is super excited and willing to work with and for you, starting with a big-name agency isn’t necessarily a good thing.

The reason why? Their numbers problem.

Because big agencies represent so many people, they often don’t submit actors for co-star roles. Why? Because there’s no money in them.

In fact, nine times out of 10, agencies will have 50 of the same actor “type” (read: niche) for landing these starring roles. By not submitting to co-star roles, they’re overlooking the opportunities for other actors on their roster that don’t fit their preferred niche.

In other words, you're actually being set up for failure. You could end up spending the early years of your acting career being wasted with few opportunities passed your way.

Every actor starting out needs to learn how to audition, how to book, and how to act in front of a camera. Co-star roles are the secret to having actors practice their craft. By signing with a big agency, they won't have the time to guide you.

"Because big agencies represent so many people, they often don’t submit actors for co-star roles. Why? Because there’s no money in them."

The bottom line: don't ever assume that you're in a good place because of big names.

If you do sign with a big agency, I recommend you put them to the test: ask them to submit you for co-starring roles. If they believe in you, they should understand and do it. If they refuse, you might want to consider another option.

I also hate to say this, but the numbers problem has always plagued big agencies and a solution isn’t in sight.

In fact, I’d say you should never overlook working with smaller agencies, which include:

Though lower in “prestige,” smaller agencies are more likely to be excited about discovering new talent. And don’t forget that smaller rosters mean more time dedicated to each actor. Yes, IMDb provides more than information on your favorite actors and directors. Available through IMDb Pro (which costs $19.99/month, or $149.99 for an annual membership), the “Companies” feature includes an agency list that’s a great place to start any agent search.

IMBd Pro also has a free 30-day trial, so I definitely recommend checking the list out for yourself.

I believe the best way to get an agent is through participating in a showcase at your school or joining one in your city.

Showcases, for the most part, are invite-only events that give actors a chance to play a lead role in a scene or sketch and show off their skills. These are oftentimes attended to by agents and other industry professionals, not to mention a great place to meet other actors and build your network.

Not All Showcases Are Equal

Even if you’re living in LA or New York City, remember that showcases vary in reputation and quality. Research is key.

First, check to see who is hosting or sponsoring the showcase, especially if it’s not affiliated with an acting school.

Next, check to see who’s running the showcase. Ideally, a professional director should be running the event and that should be evident in how everything is set up.

Finally, try to find out who shows up to these showcases. Which agents/agencies attend? Has an actor been approached by an agent following a previous event?

This shouldn’t come as a surprise, but there are scams left and right looking to make money off of the dreams of aspiring actors. Unfortunately, showcases are no different.

There are a lot of scam acting classes, especially in Los Angeles. These classes pay managers and agents for actors to attend them with no intention of meeting the actors or making connections. This is called a “kickback”.

Remember that showcases take a lot of time and preparation. Make sure your effort is being put toward a showcase that’s worth it.

Never underestimate the power of networking in Hollywood.

Another great way to get an agent is through a friend or acquaintance that is already represented. If their agent has already shown interest in you, get your friend to tell you the good, the bad, and the ugly about that agent.

Before doing so, however, make sure you and your friend are not competitors. Hollywood may be a cutthroat business, but the industry does keep tabs when ethics are violated.

"There are a lot of scam acting classes, especially in Los Angeles, that pay agents and managers to attend them and watch the actors with no intentions of meeting them or making connections."

Get an Agency Outreach Plan in Place

Once you have a list of agencies, reach out by either getting referrals from friends or acquaintances or dropping off your materials at the agency yourself. Rest assured: they will not be offended by this if you know you’ve got the goods.

When using email, make sure your photo will grab their attention, because if that’s not the first thing your recipient sees, you’ve already lost them.

When covid is no longer around and business is back to normal, it won’t hurt to drop off your materials with your photos and resume at smaller agencies without having previous contact. Make sure everything looks professional and your photos are clearly visible in the front.

Remember that talent and potential mean nothing without support from a dedicated agent. Ultimately, you want to find someone excited about you and who wants to work for you.

Other Things to Consider When Finding an Agent

Any agency that is a one-man operation is a no-no. No one person can submit, negotiate, pitch, answer phones, etc. and be effective as an agent. Every agent has to have, at the very least, one assistant and fewer than 100 clients.

Remember: having an agent who does not have a lot of clients and is excited to work for you is more valuable to you than one who only “believes in you.” Asking people to believe in you is a luxury in this business. No agents or managers believe in their clients until time reveals itself and they can gauge their clients’ potential.

You should choose an agent who is submitting you and getting your name out there over one who tells you they believe you’re going to be a big star someday.

An alternate route is to look for an acting manager. Good managers will set you up with an agent. Managers can even submit you for gigs, just like an agent.

But remember that managers typically have a different role from agents. Managers can typically be anyone you trust to help manage your day-to-day business. They’re also a person you can turn to for career advice. In short, while agents have a specific job description—to sign you to projects—managers can have a more broad role.

Yet, beware of managers who have been agents for actors in the past. The distinction between a manager and an agent is quite clear. Think of the two entities as mom and dad. Managers are “moms” and agents are “dads”; think of the 1950s-era roles each would perform in everyday life and you can get a picture of how agents and managers behave differently. If you have performed one role for many years, it is extremely difficult to switch and expect to perform as well as you did in the opposite role; so keep this in mind when looking for managers.

Don’t be afraid to ask about their backgrounds when it’s appropriate. Many times, managers are really agents in disguise.

The entire industry knows that managers should be treated almost like agents. Managers should have no more than 40 clients each, otherwise, you’ll run into the same problems with agents with super-large rosters.

How to Find an Agent: The Bottom Line

If you're a young actor and are marketable because of your training, your looks, and your skills, you should not have a problem getting representation. The right agent will not only see these qualities in you, but work hard to make sure you’re getting auditions for the right roles. Uncovering the truth about agents for actors is just one of the many topics I cover in my “Mastering the Business of Acting” course. Over 12 hours, I dive into the business side of acting that’s not covered in acting school or any other online course. Interested in learning more? Click the "Learn More" button below!