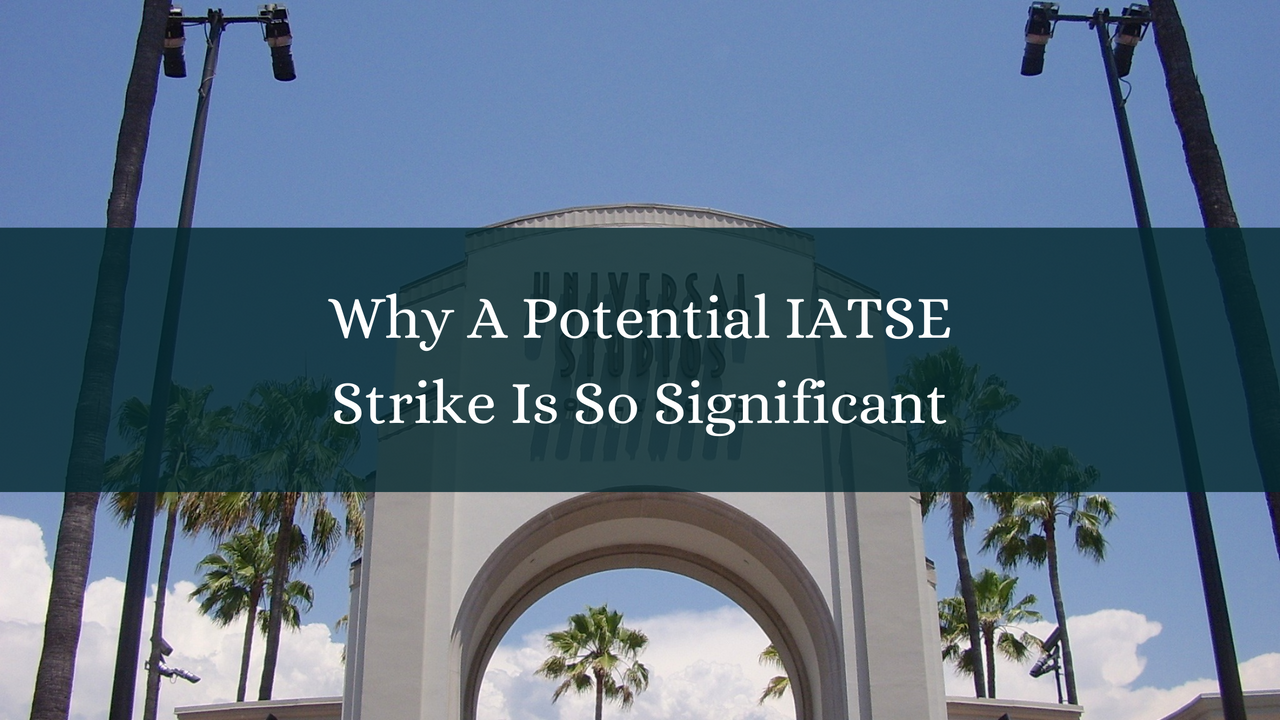 Mastering the Business of Acting
Why A Potential IATSE Strike Is So Significant
8:36

Why A Potential IATSE Strike Is So Significant

The entertainment industry is on the brink of major change thanks to the potential strike by the International Alliance of Theatrical Stage Employees (IATSE). Should this union decide to strike, everything from TV and talk shows to films to the theater will come to an abrupt stop. Thousands of workers will be affected. And today, IATSE president Matthew Loeb said that, unless a deal is reached, the union will strike on Monday.

I’m not exaggerating when I say this is perhaps one of the most pivotal moments in our industry’s history.

But what’s causing IATSE workers to strike? In short, for too long, the industry has taken advantage of workers, from long hours and fewer breaks to low pay. It shouldn’t be a surprise that, eventually, they would hit a breaking point. That time has finally come.

Below I break down each of the major points the IATSE has called on for the industry to change. Their demands need to be met to keep Hollywood afloat and the world entertained.

BREAKING: Unless an Agreement is Reached, IATSE film & tv workers will begin a nationwide strike on Oct. 18 at 12:01 a.m. (PDT)https://t.co/nFEw6ZIyKy

If you're going to survive in Los Angeles, New York City, or any major city in the United States, you need to make well above the minimum wage to survive. Yet the amounts some of the crew members receive in these cities are essentially starvation wages.

According to a recent Variety article, current wages for writers room assistants are $16 an hour, $15.66 an hour for assistant production office coordinators, $16.82 for art department coordinators, and $17.64 for script coordinators.

You cannot sustain yourself on wages like these, let alone support a family.

Of course, the obvious answer is to have production companies raise the wages of their workers, but they aren’t. These companies are, instead, moving their work out of LA and NYC to take advantage of lower minimum wages in other cities and states.

There is nothing worse than working on a set with an unhappy crew. The productivity and happiness of workers are based greatly on what they’re getting paid. Wages need to be addressed face first, and that’s exactly what IATSE is doing.

When people are working tirelessly for too long, they eventually hit a breaking point. We can only do so much as human beings.

On film sets, the monster really shows itself after 12-hour workdays. The burnout trickles down across everything, from the actors' performances to the directors not being able to fulfill their visions because the crew feels they are being taken advantage of every day at work. Most performance problems tend to be caused by a lack of sleep and proper rest.

Enforcing this cycle of inadequate rest creates a dangerous environment to work in. An exhausted stunt double or cameraman or anyone else can result in an accident, resulting in dangerous conditions for everybody involved. Most of the time, when accidents do happen on set, it is downplayed by those in charge unless it's leaked out to the public by a whistleblower. Unfortunately, that doesn’t always happen; people are, more often, left feeling stressed.

I’ve noticed the quality of projects, from the acting and writing to the directing, has gone down since this pandemic happened. You can tell everyone working on productions is exhausted like never before.

We have to demand better quality work conditions—better hours included. If studios think they can get away with forcing long hours, they will keep churning out lower-quality projects. The result? The consumer ends up losing, and when that happens, so will everyone else.

However, most productions claim they have provided these breaks when they bring food in within the first 6 hours of work, which would fall within the first meal break period. A lot of actors don’t understand that this is the wrong procedure: they assume they have been provided with the second meal break. They then sign a waiver that says there was a second break when there really wasn't.

To make matters worse, most productions would also rather pay the penalties of not providing meals for crews and add it to their overall budget instead of feeding them. This again ties into the health and happiness of the crew and how it affects everything else.

Senator @BernieSanders was among the 120 members of Congress who wrote a letter urging the studios to make a sustainable deal.

Thank you for standing with us in our fight to win reasonable rest, livable wages, and sustainable benefits, Senator! #IASolidarity ✊ https://t.co/5Jcb4iZklO

New Media has not been properly defined in our industry yet and that needs to happen. Today, the industry’s boundaries are too broad. Most streaming platforms and their work should not be considered new media, including projects from Netflix, HBO Max, Disney+, and others. These companies have evolved and now have too much leverage in the industry.

For example, they purposely leave out their ratings and the success (or failure) of their shows and films. Come time to negotiate deals with actors and crews, they can downplay their success and offer lower wages and fewer benefits. This is completely different compared to how they promote their products to the public—who doesn’t think these streaming platforms are super successful?

I would consider projects from smaller streaming services that are mostly Internet-based to be New Media.

This ordeal reminds of the 1990s and 2000s, when the studios realized there was money to be made in the indie film market. They started to open up new divisions in their companies that would specifically churn out “independent” films by acquiring indie film studios.

These studios market works from these divisions as “independent films” when they aren’t. They can bankroll high budgets (think $20 million-plus) for these projects like they are regular feature films and get the benefits of labeling those projects as “independent.”

Of course, these benefits include convincing actors to agree to lower pay, hiring exclusively non-union crews and actors, and being considered for indie film awards like Sundance. Can these works be “indie” if they belong to the major studios? This is what is happening right now with the streaming services.

In the 1990s and 2000s, SAG’s health insurance was one of the best in the country. Today, these plans are at risk. That’s because IATSE health (and pension) plans are funded by residual payments from studios. However, those residuals have dropped due to the shift to streaming and has led to a $400 million deficit in these plans.

One solution proposed by The Alliance of Motion Picture and Television Producers (AMPTP) is to increase the pension plan qualification threshold from 400 to 900 hours per year. Naturally, IATSE is against this change. The union wants streaming platforms to pay into these plans like studios.

I know health care in the United States is pretty much garbage, but if you're working for these huge corporations, you should expect to see adequate healthcare plans and benefits.

The extensive and grueling work schedules, the lack of rest, and the accumulating amount of stress industry crews are experiencing are all taking a toll on their physical, mental, and emotional health. The quality of their wellbeing has been on the decline for far too long and it has reached a tipping point.

"I say if they don't meet the demands, strike! Let’s see how, if at all, these corporations can manage for just one week."

I think the positive encouragement and reinforcement for the IATSE’s demands from the industry’s other unions including SAG, DGA, and WGA is vital. Without a crew, there is no show, there is no film. The industry can not—and should not—rely on non-union workers who can have no say in how the industry operates and treats them.

You cannot have a happy, harmonious production set if just one of the important elements of the production is not happy or healthy. Everything is connected.

The industry can make more money and better products in the long run if they stop cheating and taking advantage of people in the short run. Workers aren’t asking for the moon and stars but for fair wages, fair rest periods and meals, and better health plans. It’s not acceptable to have this “rich get richer and poor get poorer” societal norm. It also cannot be sustained. Sooner or later, the problem will grow out of everyone’s control, and that's what we are beginning to see now.

I say if they don't meet the demands, strike! Let’s see how, if at all, these corporations can manage for just one week. There has never been a more perfect moment for this to happen. IATSE, you have my full support and I hope the rest of the industry can see the light.