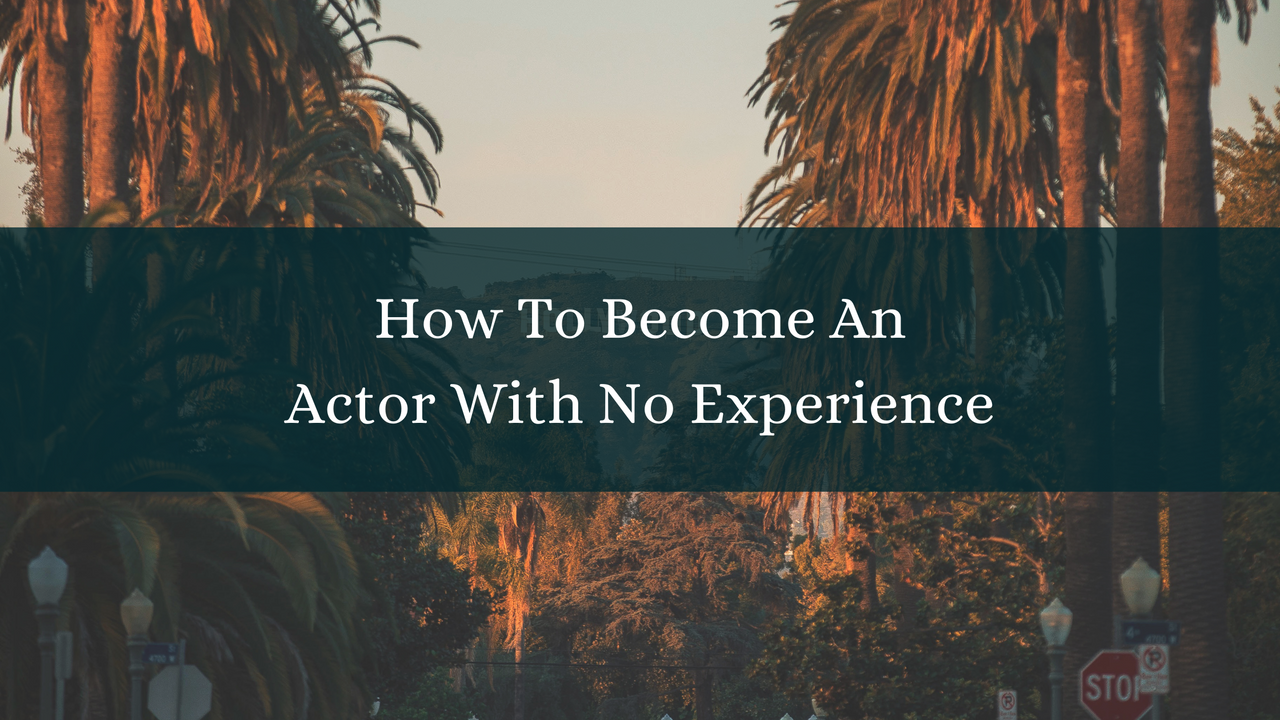 Mastering the Business of Acting
How To Become An Actor With No Experience
11:24

How To Become An Actor With No Experience

“Can I become an actor with no experience?”

It’s a question many aspiring actors have, especially those who’ve always wanted to try acting yet were afraid to chase their dream. Perhaps you’re one of them. Maybe you always wanted to take an acting class but were too self-conscious. Or maybe you were afraid you didn’t have the right “look” and therefore brushed the idea aside.

Fortunately, I have this to say: Yes, you still can become an actor!

By even asking this question, you’re headed in the right direction. In this post, I’ll lay out the steps you can take to try acting without any experience. Keep in mind that the path isn’t easy: many factors— such as your age or lack of connections—work against you. Nevertheless, achieving an acting career is still possible.

There’s no time to waste, so let’s jump right in. The Truth About Acting With No Experience

Here’s the good news: if you are between 18-24, or could pass as someone in that age range, you are marketable. If you’re over 18 and can play someone younger, you are very marketable. Good looks, unique looks, different ethnicities and backgrounds, and special talents are all marketable.

Now for the bad news: if you're over 29, the odds are stacked against you. But with some luck and planning, there’s still a chance that you can make things happen.

Take Danny Aiello, for example. He had been working in Hollywood for about 10 years before he called it quits. He would barely get casted for anything. He left Hollywood frustrated and became a door-to-door vacuum salesman. At age 39, he decided to go back to Hollywood. He got lucky and was cast in Madonna’s music video for Papa Don’t Preach and then got a few other character gigs. He eventually became one of the busiest actors in Hollywood from the late 80s to the mid-2000s.

Danny’s example shows the importance of timing, luck, and looking right for the part. It happens, you just have to be willing to work hard, for many years most likely, before getting your break.

8 Steps To Get Started With No Experience.

1. Educate yourself on the industry

I can’t stress this enough: every aspiring actor needs to understand what they’re getting themselves into.

The best way to learn about the industry is to watch interviews from professional, big-name actors and behind-the-scenes footage from big projects. The James Lipton-hosted episodes of Inside the Actors Studio—despite most of it being ass-kissing—did give details on actors' success stories at times.

I also recommend reading publications like Deadline, Variety, and Hollywood Reporter. These occasionally cover news and topics about the film industry, though keep in mind their audience is mostly for entertainment, not educational purposes.

Educating aspiring actors is also why I created the Mastering the Business of Acting series: to help people like you decide if acting is your calling. Across the 12-hour class series, go in-depth about the industry and detail how tough it really is.

The series is jam-packed with everything essential to know if you want to get anywhere in Hollywood. There’s stuff in there that the industry wants to keep hidden so that not everyone can get a fair shot at making it. The series is $199, but worth every cent.

2. Get Your Finances In Order

Finance is every actor's Achilles Heel; I’d say 90% of the time if an actor gives up, it’s because of financial problems. You’re going to need a part-time job to maintain yourself.

I recommend jobs that are flexible and that you won’t worry about getting too attached to. Waiting and bartending are always options, and today there are gig-economy jobs at companies like Uber and Postmates.

I also recommend having at least a $5,000 cushion to cover any emergency expenses. You should have these funds before even moving to Los Angeles (or New York). Don’t ruin your dreams by not having enough to get by. It’s not going to be instant glamour when you get here, you will still have to work like everybody else.

Get yourself to Los Angeles. Again, if you’re between 18 and 24, know that you are marketable and that every agent is looking for people in your age group. If you have contacts in the city, use them to your advantage.

Yes, LA is indeed very expensive. Yet you can still find places in The Valley that won’t ruin you financially. Places like Burbank, Studio City, and North Hollywood aren’t that far from the action. While costs of living here have always been rising horribly, these areas are still doable.

Do your research on areas to live in, where to work, where to take classes, etc.

The biggest secret weapon for any young acting career, regardless of experience, is the foundation that family support provides. If you can convince your parents, or any loved one, that acting is your calling and you can show them the path you will take to make it work, they're not only going to give you emotional and mental support, but they'll also be there should financial problems arise.

I can tell you the secret to my success at a young age had to do with my mother giving me the permission to fail. She also removed the worry of finances from the equation for me and my journey. Because of that, I was able to work for only 9 months as a waiter, and then I never had to look back because acting then took over.

For 25 years I was able to pay my parents back for what they gave me. I could send them money for any holiday I wanted and it’s all because the peace of mind they gave me allowed me to get fully invested in acting.

I understand that not all parents and families can help out financially. But still, simply having a support system will make all the difference. Your acting journey won’t be easy, so knowing people are rooting for you no matter what will give you the confidence to keep moving forward.

For people over 29, the road is tougher than for younger actors. Above all, you must figure out what you're selling. What kind of roles do you see yourself taking on? Are you selling a funny average guy, girl next door, the funny sidekick?

Fortunately, all of them are marketable. Yes, indeed, the options are not as abundant the older you get. Danny Aiello sold himself as a middle-aged father figure, for instance. That was a marketable angle for him and he was able to get great success from it.

You can do the same. Be very, very vocal about what roles you want to play (i.e. make sure your representation knows). All of your materials should have strong connections back to your type of role; demos should showcase your talents and looks, and your headshots should do the same.

Your marketing should be effective enough that it allows people in the room to know what kind of characters you play the second you walk in the room. If people have to guess, you’re not doing it right.

Agents are a necessity in this business. Thankfully, getting representation is easier than you think, especially if you’re between 18-24.

Before doing so, however, make sure you present yourself as a financially and mentally stable person. Have a job, a place to live, and a plan for marketing yourself. Keep in mind that smaller agencies are always better than bigger, more prestigious ones when starting. It's like that old saying that goes something like: if in the first five years you reach the top, there's nowhere else to go.

However, if in the first five years you're still trying to climb to the top, not only are you gaining experience, but you're also buying time to understand your craft and the acting business. So don’t feel like you have to rush anything or make all the right moves when you’ve just begun your journey. Your reps, if good enough, will help guide and look out for you. Their importance can’t be overstated.

There’s no way around it; just because you don't have experience or training now, doesn't mean you should continue avoiding it. There are a lot of good, affordable classes in Los Angeles. Some classes I recommend include:

Keep in mind: there are always going to be people trying to take advantage of actors just starting, so be wary of schemes or sketchy folk. These are my warning signs when looking for acting classes:

There are acting groups that you can join that cost very little. Sometimes, those are the best places for new actors in town to network and get inside scoops on where to go (or not go) and who to meet (and not meet).

8. Get Your SAG AFTRA Card

Having your Union card is very important for your representatives to see. It shows that you’re serious about this career and serious about being a part of the industry. And it's not that hard to get. Do three days of extra or stand-in work, get the SAG vouchers, and then apply for membership. Learn more about getting your Union card in my previous blog post on the topic.

Mastering the Business of Acting also features a secret way to get your card faster. Remember the union wants a lot of members to join: more members equals more revenue. They make it seem like it's an exclusive club that's hard to get into, but it's not.

So, can you get into acting without training or experience?

The simple answer is actually another question: Is this what you really want?

If you don't doubt your dream, don’t spend more than $500 to get books or courses to answer that question for you. That’s the beginning of your journey. If you think you could do something else, do that. But if acting is what you’re destined to do, work like hell to achieve that. Just stay realistic and know this is a tough business and things don't happen overnight.

Let your passion drive you forward and keep that energy consistent, you’re going to need it.